I had an hour or so to kill today while waiting for a job to be finished at work, so I spent the time having a browse at some nearby shops. One of them was Next. Now I've never been a small lad when it comes to the odd bit of puppy fat, and it has to be said that my waistline is only marginally smaller than my age. In fact by a strict BMI index rating I'm considered obese. However, there's a lot of other men in the same boat in this country, as the constant 'stoutist' media coverage confirms, so one would think that clothing shops would want to have the money from us fatties too. But it seems that Next must have an something against the rounder individual, as out of all the pairs of trousers in the suit area of the shop there was only one single pair that had a 40 inch waist! So on top of the prospect of being denied medical treatment (lots of room there for another rant in another post) I'm also now not allowed to dress smartly?
And remember that's just a 40 inch waist. This is not the morbidly obese category that requires two seats on an airplane or has issues with turnstiles. So I have to wonder if the policy of Next is to ensure the overeight can't get a decent pair of trousers to increase their social stigma in a perverse attempt to shame them into losing weight?
Well, I'm afraid this fatty is back to M&S where they still make clothes for all shapes and sizes!
..and some really nice multi-pack custard donuts! :)
Posted by GreedyGreen at 4:16 pm No comments: 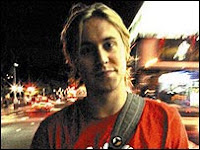 I don't get out much - that's not a complaint, it's just a statement of fact. Even at 18 when I was first going (legally) into pubs I was only ever happy if there was somewhere to sit down with my pint and it was quiet enough to chat. So now in my 40's I'm positively comatose on an evening out. Consequently it's quite exciting the odd time when I do specifically go out to any kind of event. Last Friday was an evening at the Darlington Arts Centre and the stand-up routine of Russell Howard, probably most famous for being a regular on "Mock the Week". Now I was all excited, not only because it's the first time I've been out to a "gig" since Maximus Decimus Meridius fought Commodus at the Coliseum, but also because I like the guy's quirky sureal sense of humour.
Anyway, to cut a long story short, the evening was absolutely hilarious, so if you can still find any tickets for his tour I would very much recommend laying your hands on them. Sadly I have the memory of a goldfish so cannot actualy recount any of his routine for you here, (on the upside that probably means he won't sue me for breach of copyright though), but needless to say he had me and the rest of the audience in far more stiches that anyone who uses the term "Sleepy-time" to mean "going to sleep", should ever be able to do.
Posted by GreedyGreen at 2:52 pm 2 comments: