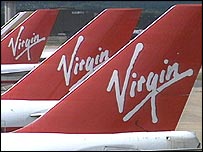 A while ago I posted a topic on how I thought people should give ol' Dicky Branson a break as he at least is doing something about climate change. It was said that his donation of millions of pounds of profit to green issues was a bit suspect as the destination of those funds was another part of his own company that researches greener fuels etc. I still say, at least the money is being used for something that hopefully will have a positive effect.
Now compare that to the government's attempt to show a green face. For instance add about 17% on to airfares as a green tax. The story is that this will "tax" people out of the habit, but I think in the main people like their holidays too much, so the net result is that people are poorer, the government is richer and just as much airline fuel is used with the same carbon footprint. Meanwhile the government is patting itself on the back for promoting a green policy, when in fact they've just found a seemingly PC way to tax us some more.
What needs to happen is that all these taxes being proposed for airline fuel, 4x4 cars etc needs to be funnelled into projects that will actually fight climate change. How about it goes to fund further grants for people to install solar panels or wind power? Or how about give it all to Virgin Fuels so that they can find a low carbon alternative to airline fuel a bit quicker...
Posted by GreedyGreen at 6:50 pm No comments:

A few weeks back Shelley and I went for a walk around Guisborough forest and Shelley took a freebie personal FM radio that she got with a magazine so she could lsten to the radio rather than talk to me while we were walking. How anti-social you may think, but practically, we're both so unfit that most of the time we gasping for breath so much that there's not a great deal of conversation that can be had. Anyway, the radio was a bit crap and kept stopping so I thought I'd get a couple of little pen drive style MP3 players (£15 for a 512kb version). Now, not only have we been learning greek as we walk with a listen'n'learn based tutorial, but I have also found that going for a walk gives me the opportunity to listen to music again - which these days just never seems to happen at home. Yesterday we went up by the Wainstones and listening to the good ol' Oxygene by Jean Michel Jarre seemed to go so well with the wind swept surroundings it's like having a soundtrack to the landscape.
Posted by GreedyGreen at 12:52 pm 1 comment:

Who makes these laws?

While we're on the subject of making things legal or illegal, a friend just sent me an email which list the statistics behind those 635 MP's that we err...trust?...to legislate:

Should this lot really have anything to do with making laws?

Posted by GreedyGreen at 6:28 pm No comments:

Anyone else getting sick to death of this one.
The answers very simple.
Make it illegal for anyone, regardless of religion or race, to wear anything covering the face in public. Incuding motorcycle (helmets once your off the bike), veils and most of all Hoodies.
Posted by Old Growler at 7:56 pm 1 comment:

People who don't take responsibility for their dog’s cr*p...

What is it with some people?... I believe that people should be licenced to have own a dog (and to have children as well, I'm sure I'll whinge about that one in the next couple of weeks...)

I came out of my house earlier to find the biggest pile of dog cr*p on my drive. It was huge, in fact it could just about be compared to a human poo. The dog that did it must have been a cross between a Mastiff, a Great Dane and a St.Bernard. All on steroids. Or maybe it was just the owner?...

Anyway, it's bloody disgusting and there should be severe penalties for people who don't clean up after their dogs. There's a big patch of grass out of the front of my house that kids play on and people let their dogs go there and don't clean up. It's like a dog-cr*p minefield. Let's hope little Johnny doesn't develop toxocariasis from playing with dog poo.

I feel I should say something if I see someone letting their dog go there but with the attitude of people today I'd probably get a mouthful of verbal abuse and it stuck through my letter-box next time. 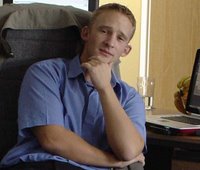 After spending the past few months in Sydney doing my MCSE and then the past four living in Koh Samui, Thailand being a beach bum - it sure is back to reality being here.

Unfortunately I had to return as my Grandfather developed cancer. I was lucky to spend a couple of weeks with him before he passed away. He was a great guy, he lived a long happy life and died very peacefully.

I was there when he died. I had never witnessed someone dying before and it was a very surreal experience. I had been out for the day and returned to my Grandparents home, as I pulled up on the drive a nurse came out to see me and told me to prepare myself for what I was about to see. My Grandfather only had a couple of hours left.

As I entered the room he was lying in his bed with his oxygen mask on gasping for breath and moaning in pain. It was the most awful scene I had ever witnessed, the gurgling sound he was making was terrible and the moans were even worse. The nurses told us Morphine was on its way and I silently cursed them for not having it on hand sooner. Luckily it turned up quickly and my Grandfather was no longer in pain.

He laid there gasping for breath with my Grandmother holding his hand. My mother was there also and I held her hand, trying to hold back the tears and control my emotions with all this going on. It was very hard for me. After a short while my Grandfather drew his last breath and stopped breathing. As he did a strange silence came over the room and at last he was at peace. It has been raining all day and at that moment it stopped and the sun came out and lit up his beautiful garden. It was quite beautiful in a strange way, my Grandfather looked so peaceful lying there.

Buddhists say that at the moment of death you reach true enlightenment. All your Worldly worries fall away from you and you are completely at peace. I saw this happen to my Grandfather and it was an amazing experience, something I will never forget. I saw how life slips away from us and what you become. Life is definitely a blessing, but it is not forever. We should all learn from this, too many of us put off things for tomorrow, things we should do today...

And that is, the tale of err... my Grandfather's death. So let's move on to a lighter note... I'm back in Blighty, the land of whingers, so it's time for a whinge…

I'm still here because some social deviants trashed my house... the b*stards!

I'd been renting my house out through an agency (I won't name) whilst I was away. The first tenants were great, an old couple who paid 6 months rent up front and made no problems. On my return my mother told me that the current tenants hadn't paid the rent for 3 months and the agency weren't doing anything about it. She didn't want to worry me about it whilst I was away, bless her…

I immediately visited the house to find a couple of local mutants living there. A young couple who didn't look like they were in the best of health. To tell you the truth these two looked like they enjoyed a bit of the old heroin and weren't to worried about their appearance, they're living conditions or my house. You can guess the rest... I was horrified. The house had been decorated before I left and was immaculate. I had stated to the agents no smokers, no pets, no DSS and definitely no 'Burra' (as it's pronounced round here) smack-heads. Great.

It took 2 weeks to get them out, a couple of letters and then a stern warning. I went round the house to find they'd stolen my white goods! They took the cooker, washing machine and fridge. They left the house in terrible state, it stunk of smoke, dogs and several other smells I couldn't really distinguish. The gardens were ruined, the walls yellow, their cr*p everywhere. A valuable lesson in renting property had been learnt.

So that's what I've been doing for the past 6 weeks, I have stripped the house entirely and have completely redecorated it. I'm sat here typing this as I'm sat in the Garden with my laptop whilst the carpet fitters put brand new carpets in through out and then it's done!.... I have to say I'm rather happy with my work and it's been a great learning experience.

The house will be put on the market within the next week and once it's sold I'll be off back to to complete my CCNA/CCNP and never to return to the (until the next relative dies... ahem.)

So that is my story. Sorry if I've bored you all but I needed to kill a few hours and thought it would be rude not to make a contribution to Dave's Blog.

I will be happy to come on here and whinge some more about living in Blighty whilst I'm here, after all isn't that what being British is all about?... No wonder we're called whinging Pomme's over in Oz.

I guess after spending a long time in and seeing how people live who have nothing has made me realise that we whinge about things that are meaningless. We have an amazing standard of living here, luxuries that people dream about or can’t even imagine. Maybe all these material possessions we own don’t make us happy and end up owning us?... Or maybe we just view our lives in the wrong perspective and simply changing that can make us happy?... Isn’t that what life is about, being happy?..

And on that note I’m off to roll around on my lovely new carpets….. : )

Is anyone else getting bored with the "when is Tony Blair going to leave" news item? It's been running for so long now that I'm sure half the population, rather than worrying about when he'll go and who'll replace him etc, actually just couldn't give a toss anymore. Certainly Rory Bremner (who I always used to find quite funny) seems to not only fill an hour long prime time show trying to extract laughs from "tony not leaving" gags, but seems to be doing it for an entire series. For gods sake man - get some new material, some new characters - we know you can "do" Tony...do you have any other voice?

On another aside, does any one else think the labour party have actually done Cameron a favour comparing him to a chameleon? Not because he's using it to say "yes, the tory's are about change for the better" or any of that crap, but more just because the chameleon looks ...well.. cute really! Something that could never be said about anything that's compared to Gordon Brown, I'll wager.
Posted by GreedyGreen at 10:17 am No comments: