Some people use heroine....

....I upgrade my camera at least once a year. Not quite as expensive but probably it still could be ranked as compulsive behavior. I've now got the Fuji Finepix s6500FD (click here to view the webpage), which is Fuji's new camera with Face Detection technology (at the flick of a button it recognises when you are pointing at a person's face and automatically adjusts the exposure/focus to suit) which I've yet to remember to turn on so I don't know how good that feature is, but the first big improvement I have seen is that the virtual ISO setting now goes down to 3200 (so it can take pictures in even less light) and the exposure time can go up to 4 seconds (again allowing you to take pictures in even less light). To illustrate take a look at a couple of cave photos. One is taken with my previous camera in caves on the Lassithi plateau in Crete in Spring 2006 and the other over Christmas with the new camera in the caves at Nerja in Spain. I'll leave you to guess which is which... needless to say - I like my new toy! 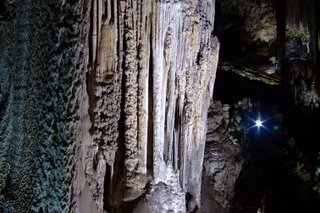 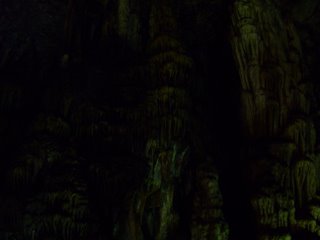 Came across this webpage the other day... (http://www.channel4.com/money/chat_vote_win/richometer/index.html)
...where you can input your annual salary and it tells you your wealth in comparison to either the rest of the UK or the rest of the world. It's obviously not going to be spot on by any means but it is a sobering thought when you realize just how much of the world's population is poorer than you. I took the average salary between Shelley and I (as for most being a couple is about shared wealth) and we're in the top 3% of the world's wealthiest people!

I pointed this out to someone who said, "yeah, but that includes all those staving millions in Ethiopia" as if that fact somehow invalidated the ranking. No - that's exactly the impact this meter had - the other 97% of the world consists of people who worry that they can't afford an education for their children, or can afford medicine for their illness, or can't even afford food to keep them alive. And here's me worrying about if I can afford a second holiday each year!

Not that I'm going to start feeling guilty about either my "wealth" or about the fact I will continue to worry about affording holidays and other luxuries, but I like it when things like this give me pause to sit back and realise just how lucky I am. Life is good to me really.

Now let's get back to moaning about my work....!
Posted by GreedyGreen at 12:07 pm No comments:

The Cat Dragged In 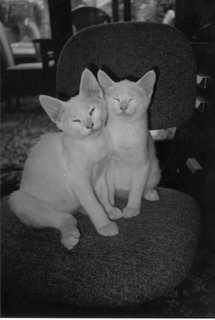 Once upon a time my cat was very cute - just look at the picture of him with his late sister - but every since he stopped being a kitten (which is strange as "kitten" is still the pseudonym when calling him as he is now the size of the average snow leopard) he has become something of a crap-cat. His fur is always shedding, not just a bit, but bucket loads. Even in the depths of winter there are clumps of white fur lying about all over the place. His ear tips are always black with oil where he's been crawling under cars. He drools and slobbers whenever you make the mistake of stroking him a little - often those nasty several inch long dangly dribbles that flail about from his chin. His eyes always have crud in the corners as he can't be arsed to wash his face. And he even sits with his head hunched down into his shoulders as if the weight is just too much to support. All in all he's fairly revolting, but he's still my cat and every once in a while he manages to look like a proper cat like now as he's curled up on a cushion on the floor asleep. He's peacefull and he's just had a brush so looks quite clean.

Shall I give him a stroke as he's looking cute? Best not.....It'll just start off the drooling again and the half squwark/excuse for a meow that's his ever present cry for more food. Best just let him sleep.
Posted by GreedyGreen at 2:35 pm No comments: